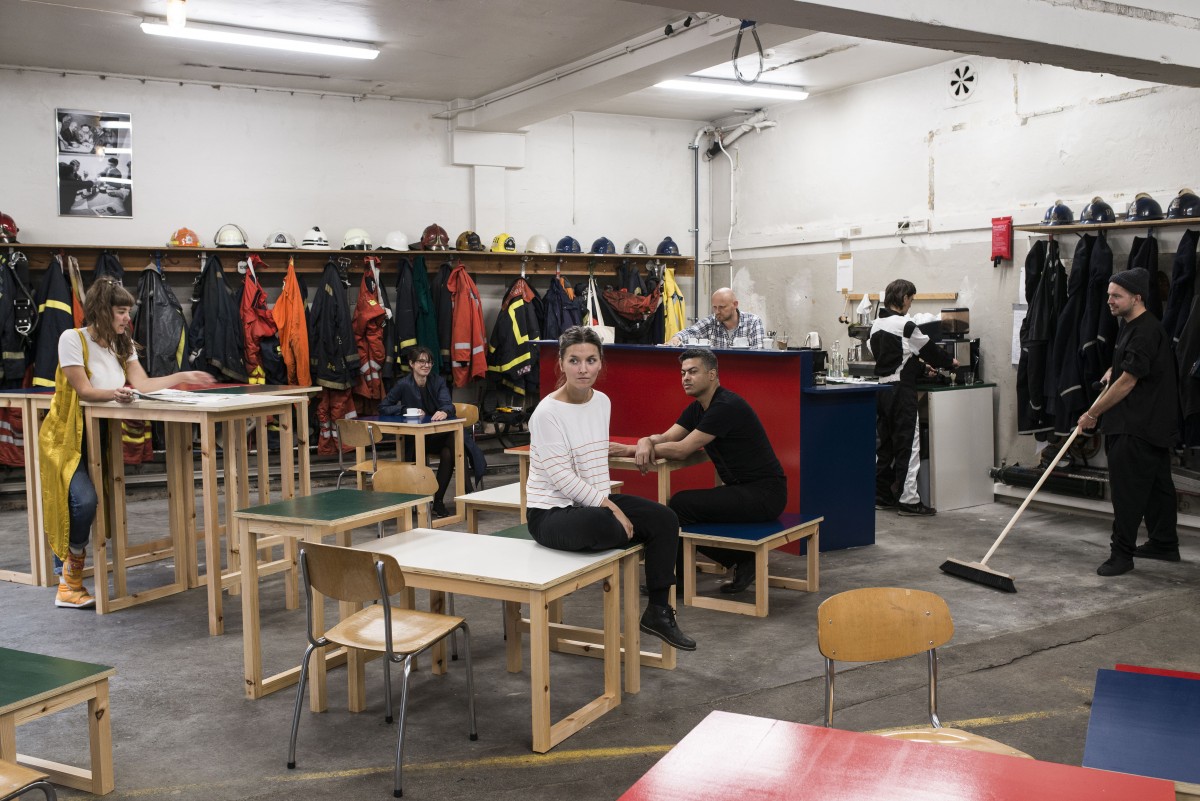 Located in the occupied fire station, The Partisan Café is as much host as it is guest, taking on issues of radical hospitality, reciprocities and commonalities. Acknowledging that pop-up coffee shops are an emblem of gentrification processes, The Partisan Café takes the economisation of the commons and the privatisation of the public sphere as its main focus. It creates blockages to make economies and relations visible and negotiable.

The authorship of The Partisan Café and its programme is shared between all the people involved in making it possible. The café is run by seven educators/performers/café workers who consider their educational work – as much as their artistic, performative and/or curatorial actions – as an organic intellectual practice. In their words: ‘We work actively against the unacceptable choice between either marginalisation or neo-liberalisation of education in the cultural field. We practice our educational work differently.’

Following ongoing discussions around the politics and atmosphere of the space, The Partisan Café seeks to perform these lines of thinking in terms of labour divisions, inclusions and exclusions. They seek feminist, anti-normative, anti-racist, anti-fascist, anti-nationalist, queer and decolonial approaches to radical hospitality and ask: What is a counter-atmosphere?

The Partisan Café is conceived in collaboration with artist and educator Jenny Moore and is also host to a radio station. In collaboration with local radio stations, the Café will broadcast projects, conversations and debates to the online radio public. International newspapers and periodicals will be available for reading, alone and together. Wi-Fi will also be provided.

The Partisan Café will host a five-week programme of events, readings, discussions, screenings and music, exploring the political, urban and cultural dimensions of our infrastructural condition. The programme is curated by freethought in collaboration with Brandon LaBelle, artist and Professor in New Media at Bergen Academy of Art and Design, and will follow four strands:

the imaginary republic
Looking at questions of public life and civic culture in today’s European environment, and how economic, social and political unrest over the last 10 years have led to an intensification of grass-roots initiatives, artistic activism and forms of public commoning. The Imaginary Republic positions itself as a creative and critical dialogue within this context, and aims to investigate strategies and formations of dissident imagination – thinking and doing beyond.

shadow citizenry
What does citizenship and the right to the city mean in the early 21st century? Is the realm of infrastructure simply the extending of economic domination and technocratic expertise, or does it contain within it the possibility for ‘amateurs’ to confront and overcome the cultural logic of neo-liberalism and financialisation?

dancing tables
Thinking about the tables and worlds between us, curating and institutions as assemblies and how to come together and disassemble from within.

acoustic spectres
How do we perceive infrastructure? Acoustic Spectres goes beyond the visual spectrum to think about how music and sound open up a different sense of what defines our infrastructural condition.