The Museum of Burning Questions: The Dancing Tables Archive 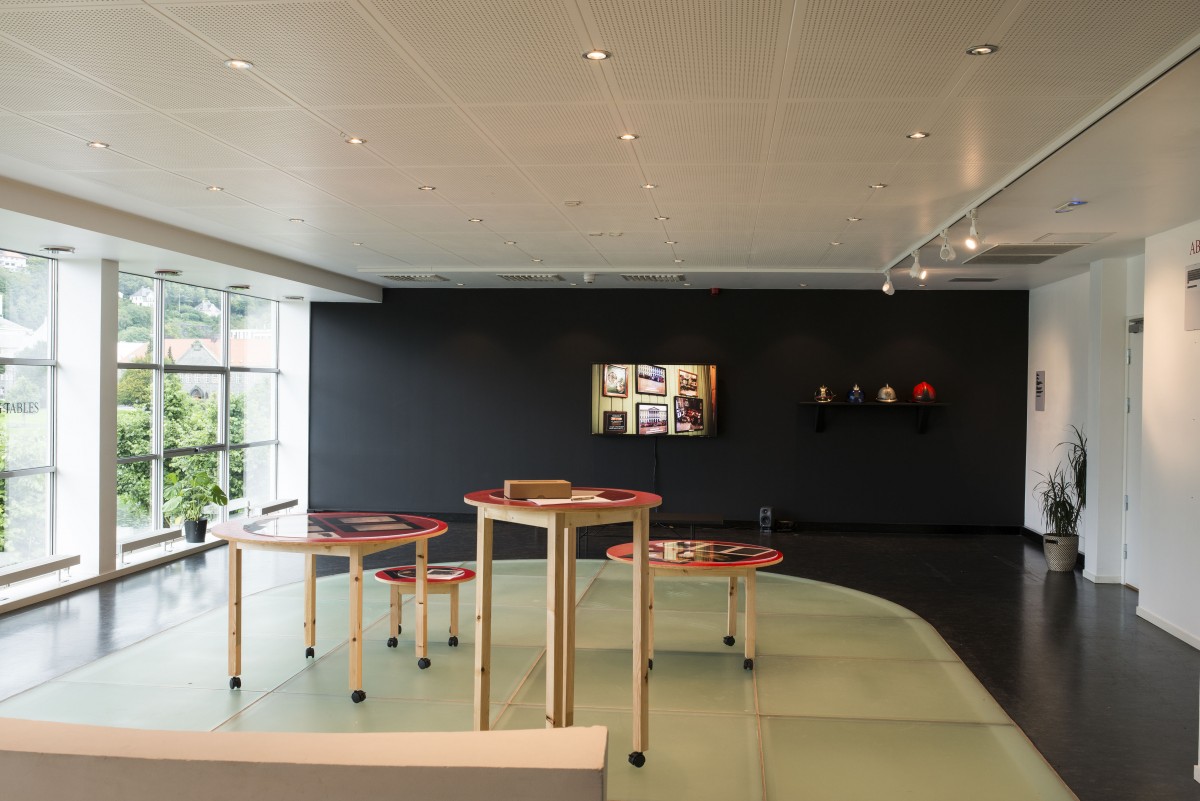 The Museum of Burning Questions is a project curated by Nora Sternfeld, in collaboration with artist Isa Rosenberger, in Bergen’s historic fire station. The former Brandstasjon is now occupied by retired firemen whose ambition is to found a Fire Museum – a plan that has existed since 1936, the 20th anniversary of the great Bergen fire of 1916.

The Museum of Burning Questions does not manifest this aim, but establishes itself in the same location as a temporary alliance with the firemen. It is a space to think and debate, with The Partisan Café as its central zone, a shared space and a meeting place. Named in relation to a choice – partisan instead of participation – the name also borrows directly from the Partisan Coffee House, which was a space in London’s Soho for gatherings, conversation and debate, organised by the New Left in the late 1950s. The use of the title is not nostalgic but an actualisation – relating to and appropriating the name towards addressing the burning questions of today.

The Museum of Burning Questions has a starting point in the history of fires in Bergen, yet situates itself in broader discourses about infrastructures. In this sense, it addresses the future of museums and of burning questions about the wider world.

As part of her work with the former Brandstasjon, Isa Rosenberger will realise the film Visions of a Museum, dedicated to and in collaboration with the retired firemen occupying the building, presented at Bergen Kunsthall together with an ‘archive’ of The Museum of Burning Questions. The film introduces stories related to the labour of the firemen; their struggle for the establishment of the Fire Museum and its associated artefacts; and the history of fire in Bergen and its impact on the city’s development. It also raises the issue of the firemen’s expectations regarding their temporary alliance with freethought, and what they consider to be the ‘burning questions’ for their vision of the Fire Museum and its wider context.

During the course of Bergen Assembly, guided tours of the former fire station will be offered. The starting point of the tours will be The Partisan Café, where part of the extensive collection of historic helmets is on display. The collection of helmets will be a starting point to discuss the plan to establish a Fire Museum in the former Brandstasjon as well as the temporary alliance with freethought and the broader burning questions of today.

Artist Ariel Schlesinger presents bags printed with the slogan fires need audiences. Open to interpretation, the phrase originated in a short poem composed by Schlesinger and the writer Dan Boehl during one of their ‘pyromania nights’ at the Akademie Schloss Solitude residency in Stuttgart, 2015. ‘Fires need audiences’ refers, in part, to Schlesinger’s obsession with fire and an urge to share this fascination with others. Having grown up in Israel, a place of aggregation, intolerance and occupation, Schlesinger is concerned with how the violence starts and what drives the cycle of disturbance.

The bags will be available from The Museum of Burning Questions during the Assembly, and will disperse into the streets of Bergen.