A two-day discursive event with internationally renowned writers and artists 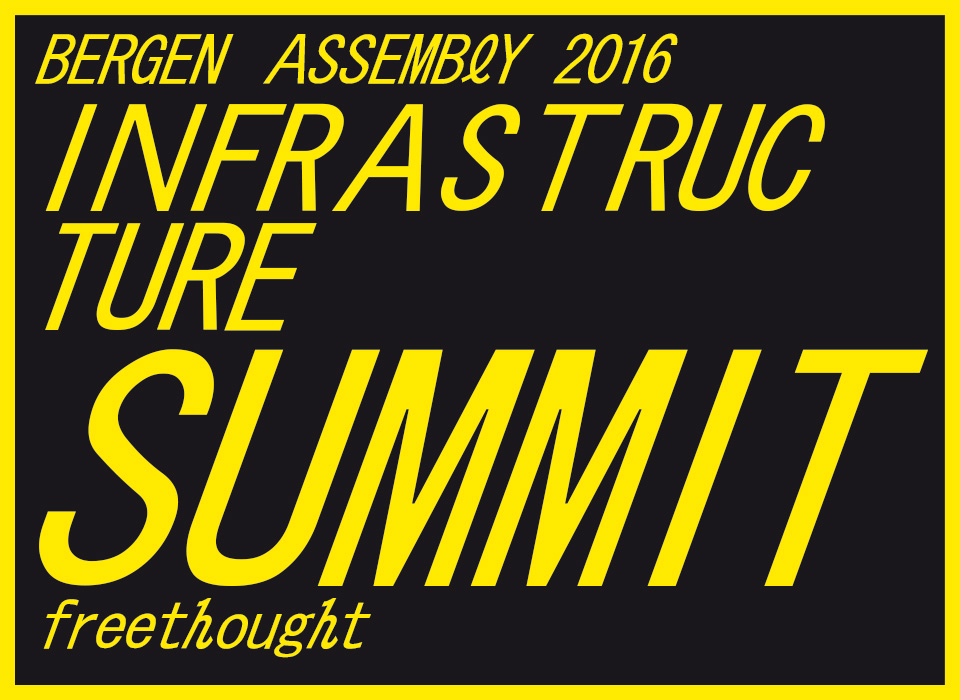 freethought‘s programme for the 2016 Bergen Assembly launches with The Infrastructure Summit, a two-day discursive and performative event with internationally renowned writers, curators and artists investigating the nature of infrastructure in times of economic disparity, ecological catastrophe, expulsion and forced migration. Talks and intensive discussions led by the freethought collective are complemented by food, film, live performance and music.

Aside each day’s programme of presentations and discussions, The Infrastructure Summit hosts several performative, reflective and communal moments over the weekend:

The debut screening of a new anime film Delete Beach, produced for The Bergen Assembly by artist Phil Collins, will take place in Cinemateket USF. Combining elements of sci-fi and fantasy, the film imagines the infrastructural future of a Bergen without oil.

The Norwegian premiere of Things that surround us, a performance by Public in Private / Clément Layes, takes place in the black box of Studio USF in partnership with BIT Teatergarasjen (Bergen). Challenging the complex choreography of everyday life and our habitual relationships with objects, seemingly inert gadgets are brought to life, subconscious routines are shattered and new relations to the world are formed.

Conceived specially for The Infrastructure Summit, INFRASONIC is a night of electronic music in Sardinen USF inspired by and exploring the sonic dimensions of the infrastructural condition with a multimedia live performance from electronic and dub composers Hallucinator (Edward George and Anna Piva) and DJ sets from artists Hannah Sawtell, Paul Purgas and Louis Moreno (freethought).

On both days of The Infrastructure Summit, lunch is provided by TASC Ablett & Brafield. Bergen-based artists Amber Ablett and Stacy Brafield’s work and research is based around social choreography; they are currently running TASC Studio Kitchen, located within Hordaland Kunstsenter (Bergen, Norway), which operates as a café, a space for investigation and a studio for thoughts.